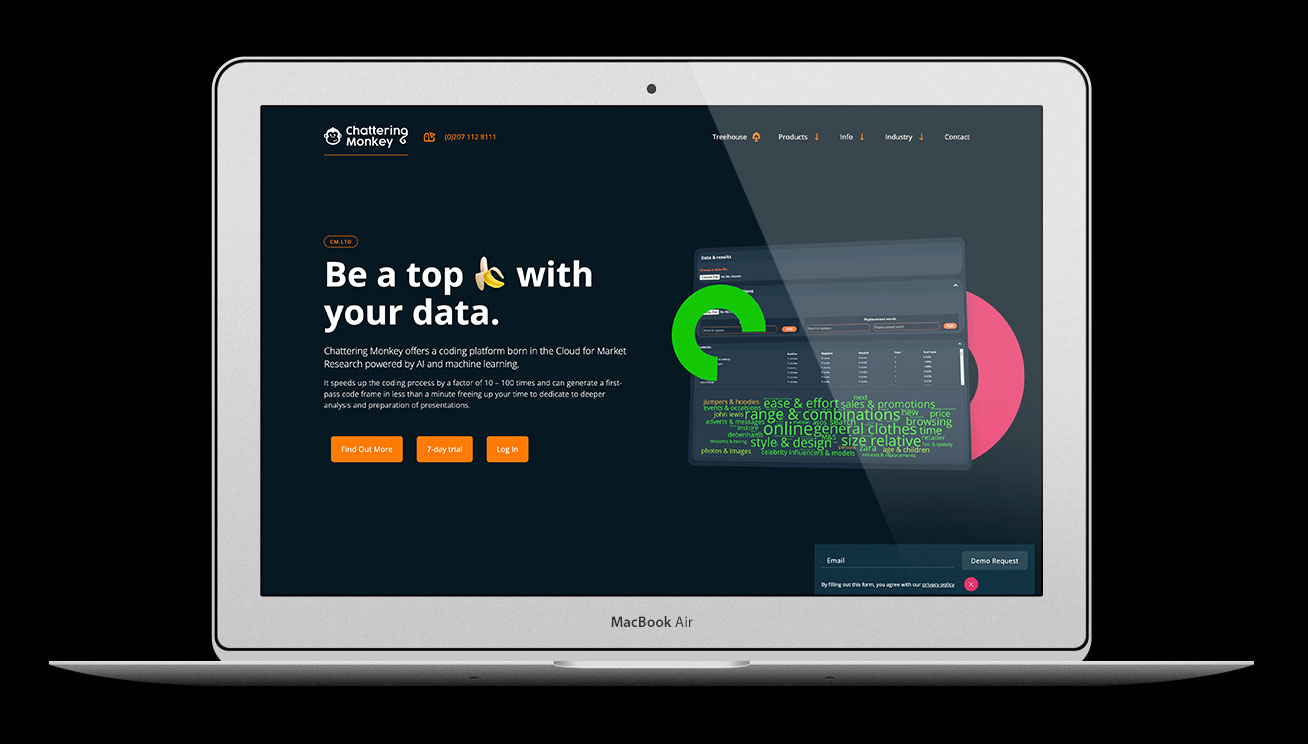 Here's what James had to say:

Every now and again a client will really encourage our design team to let their imagination run a little wild and that’s the case with Chattering Monkey. The design for the company’s website is fun and engaging and there are, as you might imagine, quite a few monkeys and some bananas involved.

James Krovina from Chattering Monkey explains that, after working in sales for nearly 20 years, he understands the importance of having a brand which people can engage with.

“We wanted something which was welcoming and warm, not corporate and bland,” he says.

Chattering Monkey offers a coding platform born in the Cloud for market researchers powered by AI and machine learning. It speeds up the coding process by a factor of 10 – 100 times and can generate a first-pass code frame in less than a minute, freeing up time to dedicate to deeper analysis and preparation of presentations.

The user can easily upload multiple data formats (including text, audio, video, etc.) to Chattering Monkey’s platform located in the Cloud where it is transcribed and translated before being cleaned and standardised and a first-pass code frame is generated automatically.

James says that the company’s website is absolutely key to its business.

“We offer software as a service and our website provides a link to that platform,” he explains. “Also, we don’t generally do any advertising, so it’s our main sales vehicle.”

James says that the team approached Target Ink, after a recommendation, having initially engaged another web developer.

“It became apparent fairly quickly that our first-choice designer was not what we wanted,” he says. “Thankfully, we discovered Target Ink and they’ve been amazing ever since. The relationship went from being a nightmare with the previous company to a pleasure dealing with Target Ink. They understood what we wanted to achieve, particularly with regards to the design; our website now looks bold and striking.”

James adds: “It wasn’t all about creating an exciting design though, the guys at Target Ink took the time to share their website design knowledge with us, particularly concerning layout and where to place particular elements to make our website as effective and efficient as possible. They understand how people use websites and that’s key. Other website guys we spoke to didn’t seem to grasp that at all. Target Ink want to make your website the best it can be.”

James explains that, having initially engaged another agency, Chattering Monkey had the bones of an initial design.

“We went to Target Ink with this and they came back with a couple of options – their interpretation of that existing design and a brand new design from their guys,” he says. “The new design was miles ahead of what we had before and we were really impressed. Their design team are fantastic! We loved it and changed very little.”

He adds: “Since then Target Ink have worked with us to tweak the website in various areas, just to keep it fresh.”

James says that the Chattering Monkey team was also drawn to Target Ink because of its pricing strategy.

“The contract they offered us made sense financially,” he explains. “I really like the concept of a monthly fee and ongoing support. It’s really transparent and there are no hidden costs – I’d say that’s unusual in the website world.”

James says that the Target Ink maintenance portal is simple to use.

“Sometimes we’ll send through quite a long list of instructions but they always deal with it all and any tweaks are made really quickly,” he says. “I’ve dealt with quite a few web designers before but never found one which offers this type of maintenance package, I’d say it’s unique. In addition, they make sure our website is optimised for mobile and desktop.”

“If you’re looking for a website then I would absolutely speak with Target Ink, they are brilliant,” James adds.